The Cymri (pronounced "kym-ri") are one of the most populous Cultures in all of Britain. Cymric people can be found as far north as Strangorre and Lothian all the way to the southern kingdom of Logres.

Long, long ago, "in the legendary times, before Rome was even founded," refugees from Troy came to this island seeking their destiny. Their leader was Brutus, a grandson of Aeneas, and from his name the island was called Britain. Brutus and his men drove out the savage race of monstrous giants who inhabited it. They established relationships with the ancient gods and goddesses and with the faerie races that live underground and in hidden kingdoms. They settled far and wide, giving every place its proper name. Ever since, the Cymric people have been the dominant British people.

Cymric principles are not based on imperial aggression, like the Romans. They are based on "humility, honor, and unity" and on "recognition of our place in the land." The Cymric peoples, or Cymri, rightfully disdain "Roman greatness," which is based on an arrogant and selective memory. They don’t talk about the fact that the great Julius Caesar was driven off. Yes, Rome came back and "temporarily conquered" the island, settling many cities, but when the empire dissolved into civil war, it was a Briton, Constantine the Great, who took British soldiers and united it again. When Armorica was devastated by barbarians and disease, it was Britons who resettled it. So the Romans came, but the proud Cymri were not assimilated and have subsequently reasserted their national character.

The cymric culture is spread over a large area. In this setting we differ the Cymrii from the Cambrian tribes. The map below show the original tribal spread, it's a good indicator of where the cultures spread to modern feudal society. 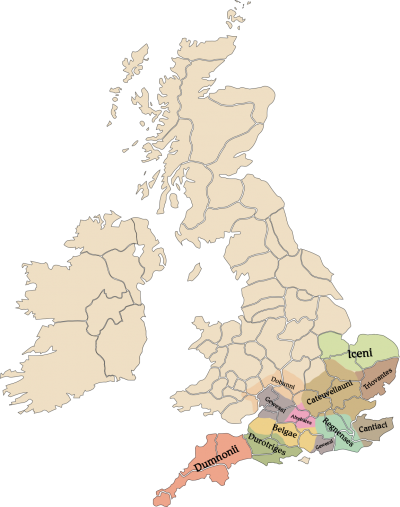 Cymric training focuses on spears & lances and all of their menfolk are confident in using such weapons on foot or horseback. Their knights are thusly regarded as the finest mounted warriors in the land whose charge is second to none.

"Ours is the first established Christian Church. Before Saint Peter was in Rome, the most holy Joseph of Arimathea founded his church here. And Joseph brought the Holy Grail, which is the most important relic of Christianity, for it held the blood which He spilled to redeem mankind.”

British Christianity is a local religion with a different infrastructure to the Roman Christian church. Key differences include that local kings, not Rome, appoints men to the rank of bishop, a stronger focus on clerical poverty, less focus on the concept of Original Sin and a different calculation of the date of Easter. (This last one may sound like trivia but, as the most important holy day in the Christian calendar, it is a major source of friction.)

"Our religion is based on respect for the land and its resident powers, whom our ancestors have worshipped for uncounted generations. It is natural and local, and we wouldn’t abandon it for an upstart minority creed started by a prophet who lived far away, in a land entirely unlike ours."

Paganism is the native religion of Britain. A mixture of local practices and beliefs, Paganism is often characterized by beliefs and attitudes that differentiate it from Christianity. The most obvious is the worship of many immortal and sometimes deific entities called gods, goddesses, and spirits. These entities inhabit the landscape, the sky, the sun, the moon, and other parts of the world, and also the Other Side (also called the Spirit Realm, the Faerie Realm, or any number of other such titles). They imbue the world with a life force and consciousness. By living in harmony with these natural forces, people live happier, healthier, safer lives. Paganism believes in an afterlife, on the Other Side, and druids also taught that souls reincarnate back onto our side as well.

"Saint Peter was the favorite of Our Lord Jesus, and he founded the only True Church. It has survived intact as our organization of bishops. Of course we obey the Pope."

Roman Christians follow the church founded by Peter, the head of Jesus' apostles and one-time religion of the Roman Empire. They believe in be "One God, One Church, One Bishop," with the Roman Bishop declared to be pre-eminent, invested as Pope. They practice centralization and tight control of all churches, with church fathers standardising the New Testament Bible, sacraments, and holy days. Although most of the fundamentals are superficially identical to British Christianity, there is enough different to create tensions that have on occasions flared into open conflict.