The History of Britain

Britain has a long history of glorious and noteworthy events, and our houses knights take place in many of them. You can also visit the year's page, to revisit old front pages.

The Oath of Crows takes place in the fictional Britain of the legendary Pendragon family. We get to follow the adventures of four families as they try to take their place in the story. Logres (also Logris or Loegria) is the name of the Pendragon's realm in the Oath of Crows. It derives from the Welsh word Lloegr, a name of uncertain origin meaning "England". 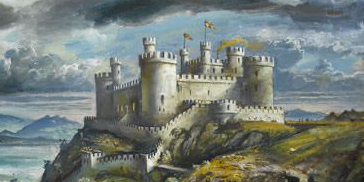 The counties are the main political faction of the game. It is between them the feudal Dukes, Barons and Lords squabble and fight over power and influence. Oath of Crows takes place in the county of Salisbury.

Counties are divided into areas called hundreds. Each county has 6-25 hundreds and each hundred incorporates 10-20 settlements. The hundred is what a player knight would call "home". It's where his friends, family and rivals most likely live. Oath of Crows centers around the hundred Hillfort in the western parts of Salisbury.

Library of Maps
A collection of maps

The most important family in the campaign is the Pendragon house. Founded by Constantine and tied into the destiny of Britain. The family is the natural heirs to the rule the Kingdom of Logres, and even the entire island of Britain. The former king of Logres is King Uther. The country is now in Anarchy and now king rules the land.

House Pendragon
The dragons of Britain

The houses of Crows are families tightly tied together by destiny and the ancient Oath of Crows sworn by their ancestors. They are sworn to stand together, be true to themselves and serve interests other than their own.

All Houses
Families and houses of Britain

The lords of Salisbury

An integral part of Britain is the enchantment that seeps through the earth of the land. Apart from the normal flora and fauna, many different kinds of monsters and creatures live in the forests and swamps.

In old days, a knight was only a man with a horse and armor, but since then times have changed. Nonetheless, armor, weapons and horses remain the most important part of any knight’s life. He tries his best to take care of them, and to get new when needed.

The life of a knight

The heroes of our story are knights, by right bestowed upon them by their lords, they serve their country, their lord and their king. They are sworn to protect, kill, obey and serve.

Here are listed articles, texts and things that has no other obvious place in the wiki.

Rules
[[File:The symbol "Category:Rules" was used in a place where it is not useful. |link=:Category:Rules]]
Retrieved from "https://w.ikabodo.se/index.php?title=Codex_Britannia&oldid=12332"
Codex Britannia :