Salisbury is a county of Logres and the home county of this campaign. Salisbury consists of the ancestral holdings of the Count of Salisbury. It roughly corresponds to modern day Wiltshire, though Wiltshire has many areas from surrounding medieval counties incorporated into it. One thing to bear in mind is that, even at peace, the borders are not distinct as they are in the present so places just outside Salisbury (though never settlements or manors) may sometimes be inside.

The fief consists primarily of the ancient town of Sarum and the large land area on Salisbury Plain around it. The fief is composed of good farm- and sheepland, and provides other good forms of income such as fisheries and toll bridges. In addition, it is one of the most densely populated areas in Logres which means a proportional increase in harvest income and (later) scutage duties.

The county includes one large town, Sarum, and four market-towns Floodriver, Magpie, Streamfield and Wereside. Many smaller villages and hovels are not shown on maps but tend to cluster in river valleys within trading distance of the main cities. The county also has six castles. 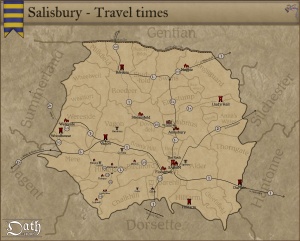 Map of Travel times in Salisbury

Traveling is not just a matter of simply going from one place to another. In addition to the problem of not knowing your route are the problems of traveling safely and finding safe accommodations. This increases travel time.

Travel is usually safe within the demesne of a lord, unless of course the local lord lives by robbing travelers weaker than himself—which is regrettably quite common outside of Logres. As well, groups of bandits often hide near roads and tracks through forests and wild lands to waylay the unwary. Journeyers must always be on the lookout, perhaps even sending out scouts, a process that slows them down considerably.

Finally, stopping to eat and rest is common. In particular, persons not used to travel, especially women or children, require more frequent stops.

Places of Note in Salisbury 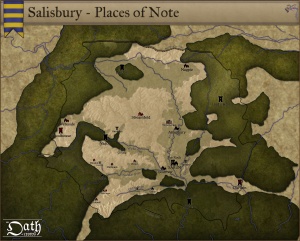 Map of Places of Note in Salisbury

Salisbury is an old and ancient land filled with mysteries and ruins, many of them forgotten. It is notable for its pre-Roman archaeology and ancient druidic sites. The ancient people that occupied southern Britain built settlements on the hills and downland that cover Salisbury. Stonehenge and Amesbury are perhaps the most famous ancient sites in Britain. 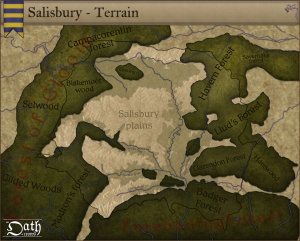 Salisbury is characterised by its high downland and wide valleys. Salisbury, a mostly rural county, lies on chalk, a kind of soft, white, porous limestone that is resistant to erosion, giving it a high chalk downland landscape. This chalk is part of a system of chalk downlands throughout eastern and southern England formed by the rocks of the Chalk Group and stretching from the Dorsettte in the west to Dover in the east. The largest area of chalk is Salisbury Plain, which is used mainly for arable agriculture and by the Logres army when gathering for war. The chalk uplands run northeast into Gentian, and southwest into Dorsette.

Between the areas of chalk and limestone downland are clay valleys and vales. The largest of these vales is the Avon Vale. The Avon cuts diagonally through the north of the county, flowing through Bradford-on-Avon and into Bath and Bristol. The Vale of Pewsey has been cut through the chalk into Greensand and Oxford Clay in the centre of the county. In the south west of the county is the Vale of Wardour. The southeast of the county lies on the sandy soils of the northernmost area of the New Forest.

Chalk is a porous rock, so the chalk hills have little surface water. The main settlements in the county are therefore situated at wet points. Notably, Sarum is situated between the chalk of Salisbury Plain and marshy flood plains.

In the are around Vagon are several large bogs, which holds some iron.

Maps of the Hundreds of Salisbury 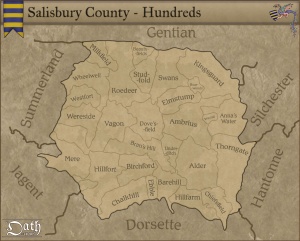 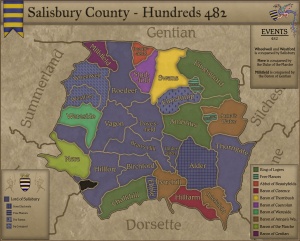 Held by the Rock