The Hundred of Hillfort

Hillfort hundred is the remains parts of an old tribal kingdom. As a hundred it is today split and without a set ruler, since all the farms and manors are ruled by many different lords. It’s located in the Nadder Valley, in the western parts of Salisbury. The western parts lead to Jagent County, but are protected by the thick forests of Gloom. To the south-west lies Dorsette.

Hillfort hundred in the Naddar valley holds a long history of turmoil and war since the tribal times. It has shrunk many times and is today but a shadow it it’s former glory. Yet, some old customs and oaths remain.

In Constantine's time, the Bannermen where given shields as a reward for their effort in the war against the Irish cheiftain Niall. The unit commander Yerward was granted the roman fort Bellum Duris (Wardour). When Yerward died in 445 during the Siege of Wardour, the Hillfort that gave the name to the hundred was lost. He had no sons and his estate was left to The Rock.

It's not often used, but the shield of Yerward still acts as the symbol for the hundred and hangs over the empty chair in the hundred court.

The shield, per fess Argent and Vert A Castle proper in middle chief, is a simple shield representing the green hills of Hillfort with the fort guarding it.

Each month, the warriors of Hillfort gather for the hundred court, to solve local problems and to judge the commoners for their crimes. Serious crimes are sent to the Sheriff of Llud’s Hall, as none of the warriors present holds the right to judge High Crimes. Not all warriors have time to gather, in these cases they usually send a trusted man in their stead. 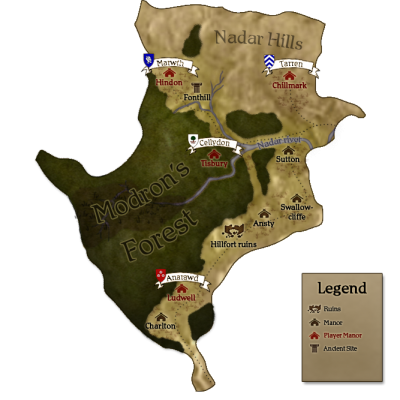 Manors in the hundred